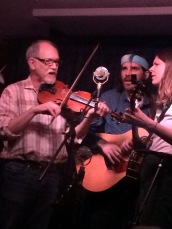 Bruce Molsky will lead a workshop and a concert on December 15th in Northampton’s Parlor Room. Bruce is a leading advocate of old time fiddle music whose work spans genres and generations. He’s a serious musicologist and has a serious work ethic which he refers modestly as a “bunch of projects”. Touring worldwide with Molsky’s Mountain Drifters (pictured top right) a trio of Allison DeGroot and Stash Wyslouch as well as releasing a disc with Scandanavian supergroup Mozaik are just two of his recent projects.

Our conversation covered some of his early influences from Billy Taylor’s Jazz Mobile to studying years later at the feet of old time legends in the Upper South. We talk about his role as educator at Berklee’s School of Music and his efforts to establish the American Center for Folk Music in his hometown of Beacon NY.

Of course, the segment includes some old time fiddle tunes including Bruce’s versions of “Piney Mountain”, “Shelving Rock”, “Forked Deer” as well as the Mountain Drifter’s “Old Jawbone” and a version of “The Drunken Hiccups” finishes this set of old time standards.