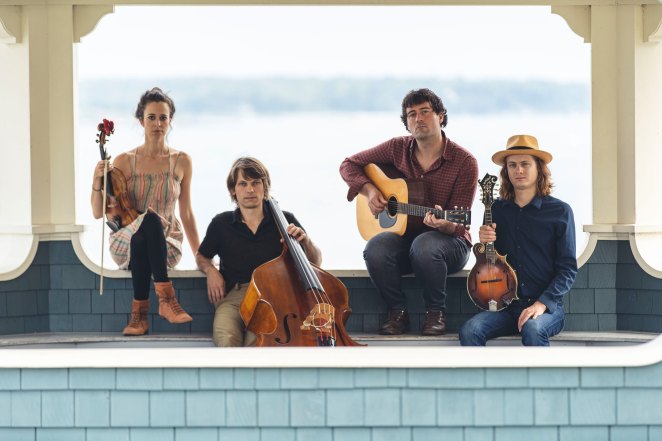 Dominick Leslie is one of the bright young mandolinists of his generation. Selected to be one of the Young American Mandolin Ensemble representing in France, Dominick has studied with the very best. David Grisman, Sam Bush, Chris Thile, Andy Statman, Mike Compton and countless others have made him one of the “go to” mando played for many a spontaneous ensemble. Last summer’s Green Mountain Bluegrass and Roots festival included Dom in their all star “Strength in Numbers” tribute, for example. Dominick is a highly sought-after collaborator as evidenced by his numerous side projects including Sam Reider and His Human Hands, Phoebe Hunt and the Gatherers, The Bee Eaters, Missy Raines and the New Hip, Grant Gordy Quartet, and The Deadly Gentlemen.

This month he’s touring with the fabulous instrumental quartet, Hawktail. The band also includes Brittany Haas on fiddle, Paul Kowert on bass and Jordan Tice on guitar. They will be appearing at The Academy of Music’s Back Porch Festival on Saturday 2/29 as part of the bluegrass bill with the Travelin McCoury’s and Della Mae. Hawktail will also be performing a Parlor Session on Sunday 3/1 at Northampton’s Parlor Room.

Our interview includes a trio of tunes from the recently released album “Formations” including Annbjorg,Dandelion and Last One on the Line.